Once completed, jump up and down in excitement, that you have contributed to a cause that helps the entire community of Spokane.

In 2006, less than 60% of students in Spokane Public Schools were graduating from high school. Research showed that failing to graduate dramatically increases the likelihood of experiencing other serious problems like poverty, unemployment, and homelessness.  We intervened along with a collaboration of community partners and by 2013 increased the graduation rate to nearly 80 percent earning Spokane County the Robert Wood Johnson’s Culture of Health Prize.  The graduation rate has since continued to increase. 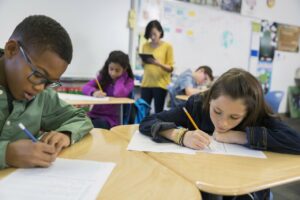 How We Did It

Priority Spokane brought together schools, businesses, foundations, government, and social service organizations to collectively address the problem.  We partnered with Gonzaga University to research the issue and then we used that research to develop a regional plan.  Our partners at area foundations helped fund the work in addition to a national grant. The plan started with the creation of the Early Warning System (EWS) which was launched in Spokane Public Schools.  This system monitored student attendance and grades in real time and provided alerts to school staff when students were struggling.  The EWS platform was developed after analysis of local data showed that there are clear predictors- such as higher level of truancy- among students as early as 3rd grade that increase the likelihood of dropping out of school later on. The goal of EWS is to identify students at risk of dropping out and then provide a tailored intervention.  In addition, Spokane developed Community Attendance Teams (CASTs) which are comprised of educators, business leaders, and nonprofit representatives.  They work with middle school students who have had four unexcused absences during the school year.  Before a truancy petition is filed, a CAST meeting is set up to support and work with the student to provide solutions.  Finally, Spokane County partnered with businesses to build a pipeline to better jobs through the construction and creation of Spokane Valley Tech, a collaborative effort of four county schools and a local energy company to provide training and education for area students around science, technology, engineering, and math. Read more about it, watch a video, and see the award won as a result by clicking here.

Where we are in our
process

We've found a 3-5 year system that works. Here's an infographic that shows how and where we are in determining and achieving our goals.

Priority Spokane reviewed current data, met with stakeholders & regional experts, and ultimately selected educational attainment as our priority in June of 2009.  At this time Spokane County had graduation rates below 60%.

We contracted with Gonzaga University in April of 2010 to research and conduct a study of model practices.  Our partner, the Innovia Foundation, in addition to a grant from the Gates Foundation funded the research.  Gonzaga created a regional plan to place an early warning system (EWS) in middle schools that would alert school staff to students who were in danger of dropping out. Middle schools were selected over high schools as an ideal entry point to prevent/address early problems faced by students before they entered high school.  The EWS provided alerts by tracking increased school absences, behavioral problems, and academic struggles of specific students.  The plan also included placing Community Action Assessment Teams in middle schools to meet with students identified by the EWS alert system and review what needs/struggles they faced and identify resources to assist them.

We monitored and measured attendance rates, academic performance, behavior of middle school students, and ultimately our graduation rate.  Ultimately, in partnership with community partners and schools, we were able to improve graduation rates from below 60% to over 80% in five year’s time. Priority Spokane and its partners received the RWJF Culture of Health Prize for this amazing work! You can read about it here and watch a video about the process.

Priority Spokane reviewed data and feedback from staff, stakeholders, and community experts and were able to expand the system to aid other schools.  We continue to monitor graduation rates which as of 2019 stand at 83.4%. You can view graduation data for Spokane County and WA State for yourself here.

Research is extremely important when finding a solution to any conflict or problem, and this priority is no different.

Learn About Our Research

Which schools need what? How much? When?

The steps we’ve determined are necessary to reach our goals.

There are limited initiatives currently focusing on K-8th grade students and their families that are imminently at-risk of being homeless or are doubled up (unstably housed) with another family/friends; these families do not qualify for HUD funding or housing assistance.

By stabilizing these families, we are preventing the trauma students would experience by being homeless. We define mental health in its broadest sense, not referring solely to diagnosis and treatment of mental illness. Specifically, we are looking at preventing the chronic, traumatic stress experienced by homeless students.

Priority Spokane has moved from priority to priority learning, collaborating, and continuing to swi...

My name is Faith Ngae. I am a senior at Gonzaga University majoring in Psychology and Sociology wit...

How you can help

Making measurable change in our community will require community-wide action through collaboration of agencies and organizations and through individual action, such as volunteering and contributing resources.

How it Helps & Where it Goes

The Priority Spokane Fund has been established within the Innovia Foundation our fiscal sponsor. To contribute, click on the “donate” button to your left, or copy and paste the link listed below. Select Priority Spokane Fund from the drop-down list in step 1. The Steering Committee will make decisions on the award of funds in the form of grants to non-profits and agencies working on Priority Spokane issues.

Once completed, jump up and down in excitement that you have contributed to a cause that helps the entire community of Spokane. Also, close your eyes and imagine all of the high fives and thank you’s that we’re sending your way.

Every bit helps us better our community

We'd love to hear from you regarding any general questions, suggestions, or comments.

We're a busy group that is constantly working to reach our goals, but will get back to you at our earliest convenience.